The end of September again means only one thing for me. My annual visit to the Adventure Overland Show held on Stratford upon Avon racecourse. This year I visited on my own some. The Extreme Knitter had other commitments.

The show gets better each year with many varied trade stands, displays and so many interesting vehicle in the camping and parking area.

As always, I will just leave a few of the photos for you to digest.

This beauty was a work in progress. It just oozes classic Landy.

Just a little electrical work that needs tiding up. One of those five minute jobs 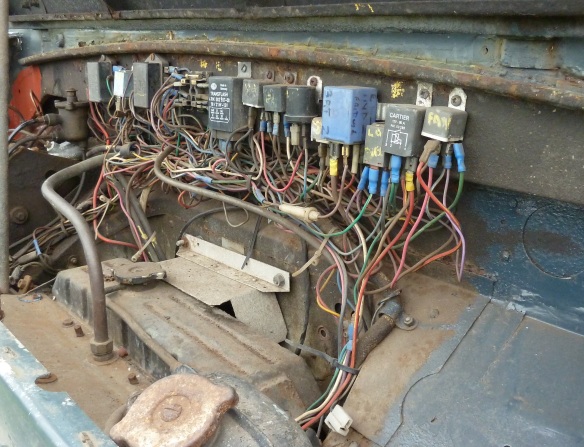 Xplora Overland were showing their new Ford Transit conversion. If only I had the money. 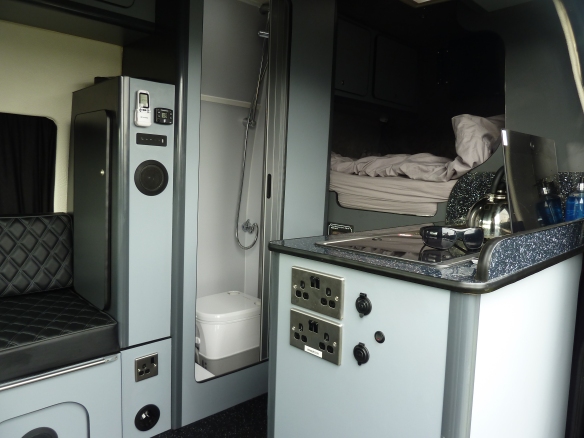 I’m trying to convince the Extreme Knitter that we need to tow one of these buggies behind our campervan. 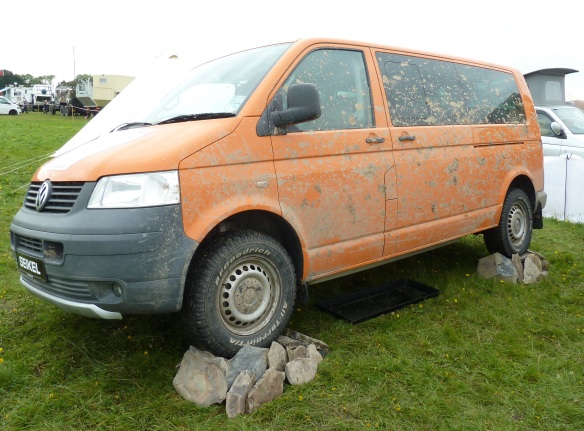 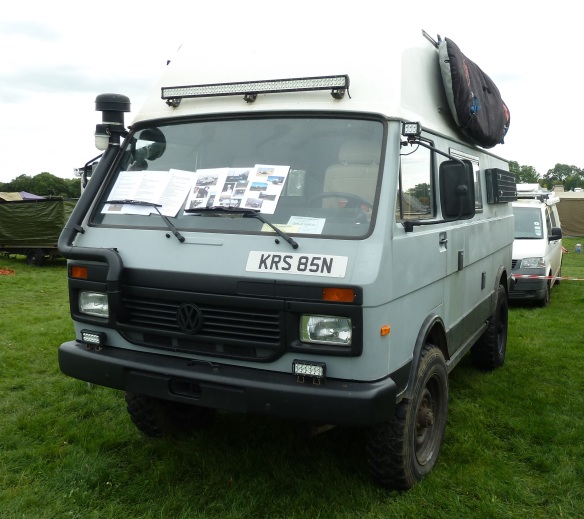 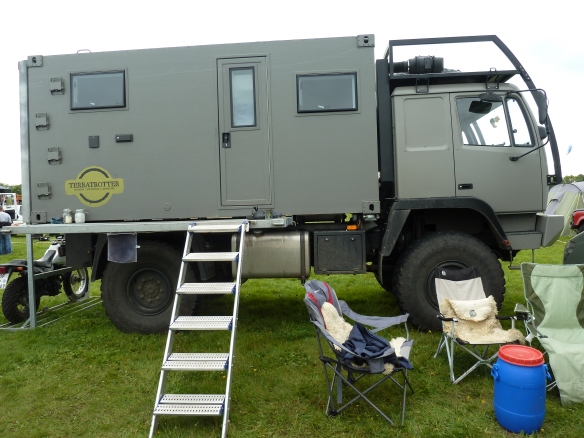 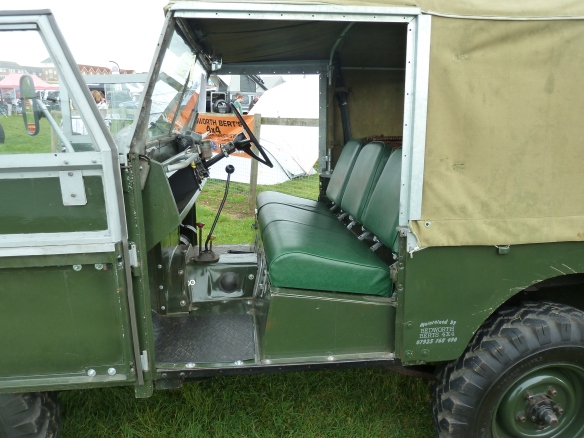 Our Old Series One Landrover

I do regret selling our Series one Landrover. The beauty of hindsight.

We snatched a couple of days off and on Sunday morning headed North to Derbyshire and the Peak District. Our camp site for the trip was Ilam hall the National Trust property.

Ilam Park Caravan site is a beautiful green oasis nestled in the grounds of Ilam Hall, about 5 miles from Ashbourne in the southern end of the Peak District National Park.

The hall was built in 1827 and was destined for demolition in 1930. Three quarters of the hall had been demolished before Sir Robert McDougal (the flour magnet) bought it for the National trust to be used as a youth hostel.

I found it rather grand sleeping in the grounds of a Victorian hall, but of course the Extreme knitter being a Lady herself takes it in her stride.

We took the drive away awning with us, but the strong winds meant we couldn’t put it up.

We spent the afternoon wandering around the extensive park land admiring the hall and the river.

Yes, we had meat balls in homemade tomato sauce again, but we have decided to alter our first evening meal for future trips. Just need to decide what to have instead.

Ruby came with us on this trip although she had some dental work carried out in the week. Yorkies are prone to having dental problems, so she had a clean and descale at the Vets. Unfortunately she had to have three teeth removed, one being a baby tooth that hadn’t popped out in her youth. We were concerned that she wouldn’t be up for this trip after the anaesthetic, but she was back to her normal self the following day.

This campsite is stunning and fairly basic in a good way, it’s a bargain at £16 per night with electric hook-up.

The facilities are housed in an annex of the hall which a fair trek from the camp pitches, so a trip to the toilet has to be preplanned. It’s no good waiting until your bursting. 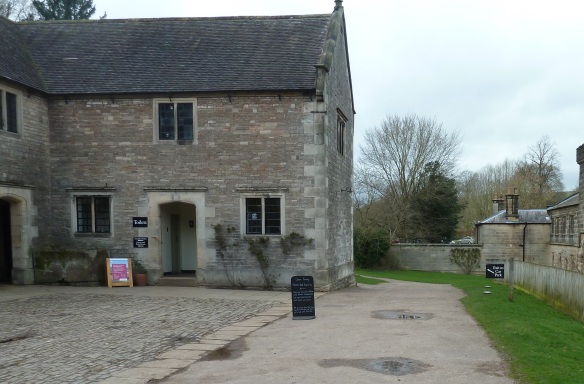 This slight inconvenience (see what I did there) is a small price to pay for the privilege of using this site. There is however a well sited fresh water, waste water, chemical toilet disposal point and refuse bins situated bang in the centre of the site.

During a late night trek to the toilets I could hear footsteps following me, so I stopped and looked around, but there was no one there.

I carried on and the footsteps started following me again. At this point I was having visions of a mad axe man/woman ready to murder me. After looking around and finding nobody, I finally realized that I was hearing my own footsteps being amplified through my new hearing aids.

Monday morning and Ruby woke me up to go for a wee. The rain was torrential at this point and she didn’t hang about outside for long. We eventually dragged ourselves out of bed and cooked a full English breakfast to set us up for the day.

Calamity!!! The electric power supply tripped. A quick reccie showed that rain water had entered the supply socket and tripped the circuit breaker. No problem, the site rangers were sorting it out later for us as we were going out and we didn’t need it until we returned.

Unfortunately, I disconnected our supply cable then I promptly slid down a muddy embankment on my back.

I was covered in mud and feeling embarrassed I quickly got up as if nothing had happened, as you do. I changed my clothes while the Extreme knitter hosed the mud of my rain coat and we finally set off for Bakewell.

Following the sat nav directions, is always a risk, but we got to see some beautiful countryside whilst travelling down some narrow country roads.

We have visited Bakewell before on a previous trip and experienced the Bakewell tart/pudding wars.

Well, because I couldn’t decide which was the best back then I just had to have a rematch. Funnily enough even after a tasting session I still couldn’t decide, but I must say the lemon/coconut version of the Bakewell tart was scoring a 10 out of 10, but technically it wasn’t the original recipe so it didn’t count.

Parking in the farmer’s livestock market car park was a little muddy and I had to walk very carefully as I didn’t have another change of clean clothes if I decided to slip over.

The walk in to the town took us across the footbridge covered in padlocks. 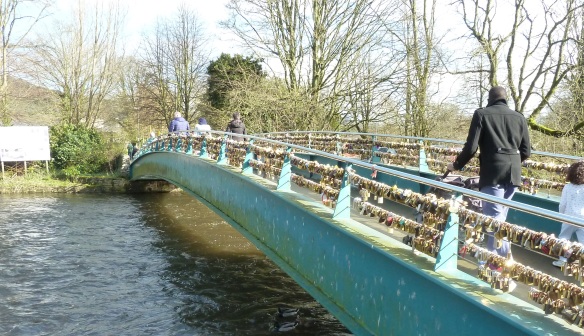 We drove back to the campsite via Matlock Bath which has gained a reputation for being a landlocked seaside resort. The river creates the focus for the visitors to promenade up and down and during the autumn they have the river and road illuminated similar to Blackpool.

Tuesday came around quickly meaning we were heading home. This campsite is run by National Trust and staffed by volunteers. We couldn’t have wished for a better pair of site rangers as Colin and Jenny. In fact in all the years we have been camping we have never met such a pleasant and helpful couple. We will return.

Of course our trip home would be incomplete without a visit to a wool or sewing shop and as always, the extreme knitter had located two shops in the same street in Darley Dale.

I will say that she is a dab hand at sewing/knitting etc.

Many years ago I asked for a pair of trousers legs to be turned up. “Put them on the sewing pile” she said. A few years later I found my trousers still at the bottom of the pile. I tried them on and found I had grown in to them.

We use a large 8 litre capacity pressure cooker at home that is great for large quanities of stew or soup to freeze. Large meat joints are so succulent when cooked this way. 8 litres is big and also a bit of a hassle when you only want to cook a small amount.

We started looking at small pressure cookers that would serve as a useful everyday size for the kitchen at home and double up as a utensil for the campervan.

The advantages of using a pressure cooker are low running cost with a vast reduction in the gas used and the food retains its flavour in the enclosed pot as it is steamed rather that boiled.

Research highlighted the Indian manufactured Hawkins range and I started to look for a 2 litre capacity Hawkins original cooker as made by the company since 1959. 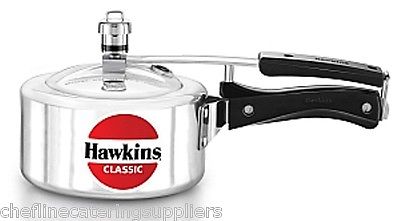 Luckily, the guys from the Betty Bus Blog told me about their Hawkins Futura model and that’s what I purchased. 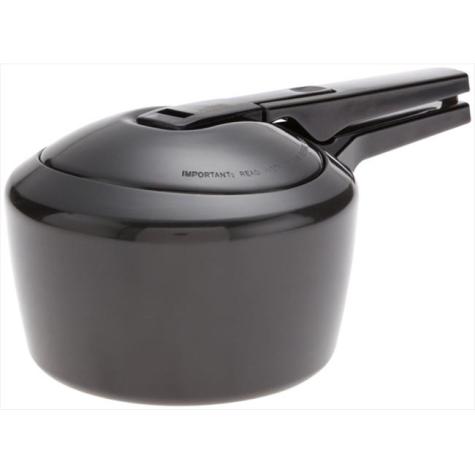 Although a 3 litre would have been a good size for home use unfortunately it wouldn’t fit in the campervan.

The quality is exceptional, with its hard anodised finish and clever mounting of the pressure weight. It’s flowing modern design has earned it the accolade of being the only pressure cooker in the world to have been displayed by The Museum of Modern Art, New York.

We use it on a daily basis at home as it’s ideal for two people, so it will be ideal for our campervan trips.