Well there is something we haven’t seen in a while, a right foot.

It may be scarred and lily white, but it’s moving, which has to be a good thing considering the procedure the extreme knitter had done.

As much as we loved the purple cast we won’t miss it.

Sorry no photos of the offending foot as it may be too gory for some, so here is a similar foot for reference purposes. 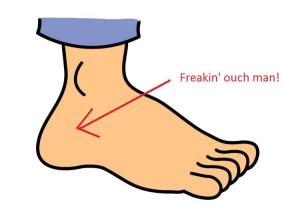 Are we mobile again? Well not quite. The E/knitter was fitted with a walking boot, a pair of crutches and told to only partially weight bear for four more long weeks.

The cabin fever is getting hard to bear.

Puffin has passed its MOT test, it’s been taxed and insured for the year and we are stuck here.

Next week the extreme knitter is having her plaster removed. She will hopefully be fitted with a walking boot and be able to start the long process of weight bearing. We will start travelling again in February with some short trips away and build up gradually. Destinations for the year have been discussed and North Devon, North Wales and Scotland have been added to the list.

The experimentation with the Omnia oven continues. I ordered a roasting rack to fit into the base and this makes baking potatoes and bread rolls so easy.

I’ve found that it’s better to bake four small potatoes rather than 2 large ones which take a lot longer to cook.

I ordered a pair of Upgraded Headlight bulbs for Puffin supplied by Regal bulbs. The bulbs are Philips Xtreme Vision that give an extra 130% more beam length and a much brighter white light. I’ve fitted these to our other vehicles and the difference is amazing. Regal have an offer at the moment to include a pair of higher intensity side light bulbs free when ordering headlight bulbs.

Anyone who owns a Volkswagen T4 will know how poor the original headlights are. This is particularly due to the voltage drop on the power feed to the bulbs caused by thin cable size. The new bulbs should make a difference, but I think I’ll have to fit a Loom upgrade to get the best from them.  Loom upgrade.

I bought a bottle of Elsil Drinking water purifier made by Elsan to add to our onboard 80 litre water tank. We’ve never used the water from this tank for drinking even though I regularly clean and flush it out just incase we might catch some bug or deadly virus from it.

We carry a separate 10 litre container for drinking water which seems silly when we have all that water onboard.

The Elsil is supposed to keep the water drinkable for several weeks. If it is successful I’ll post about it at a later date, if it’s not you’ll notice that my posts will stop suddenly due to us being struck down by some dreadful exotic disease.

I have been looking at the history of my birthplace and came across this shocking entry from a Parish council meeting from 1934:-

Arguably the keenest debate in 1934 was over the conduct of campers in the village. There were accusations against the campers for rowdyism until the early hours of the morning, wilful damage to gardens and property and – the ultimate charge – of parading half-naked, which led one person to declare that Kinver was “being turned into a nudist colony”. The parish council expressed strong disagreement about the allegations and that such statements were harming the good name of Kinver. The chairman said some residents had signed a petition complaining about the campers. If the supporters of the campers had acted on similar lines they would get about 800 signatures, he said. “Just because one or two people have come to live in Kinver, they think they have bought the place”. He agreed a few campers were rowdy but the way to deal with them was for the owners of the camp to get rid of them as soon as they became a nuisance. He had been up and down Stone Lane on several occasions and seen nothing out of the ordinary. Campers spent a good deal of money in the village.

Mr Massey looked at all this in a different light. “I think people who come here and pay rates should not be kept up until 12 or 1 in the morning by these rowdy people playing mouth organs, concertinas and gramophones”. The chairman said he got more nuisance from locals at his house than campers. Massey battled on. He wanted rowdyism stopped. “When a man has 100 people or more on his land, what are the sanitary conditions like?” Mr Biggs said that question had been raised with the sanitary inspector and he had said everything was satisfactory and in order.

Mr Williams asked what sort of reputation did Kinver get from press reports. A remark made about Kinver being turned into a nudist camp was the greatest mistake allowed to creep into a newspaper. “It made a stink in the nostrils of every self-respecting person”. Mr Fletcher said he had been asked in Stourbridge to what extent was nudism carried on in Kinver. He did not say whether this was to heap opprobrium on the issue or an eager desire to join in. All that had ultimately been seen was a man stripped to the waist and a girl in a bathing costume.

I hasten to add this was before my time and I was never rowdy, well not much. It’s funny how things never change, even after 82 years people are still complaining about noisy campers.

Today is a proud, but sad day for us as our Grandson is joining his regiment in Newcastle after training at the Army College for nearly two years since leaving school. He has turned eighteen and become his own man. It doesn’t seem that long ago that I taught him to ride a bike, went canoeing and took him on his first camping trips. His Nan has smothered him with love and home cooking. I hope that between us we have given him some guidance.

His Army career is taking an almost identical route to that of his Great Grandfather. Both with the Royal Artillery, both serving in Scottish regiments, both having similar combat roles working behind enemy lines. The only difference is the technology involved. 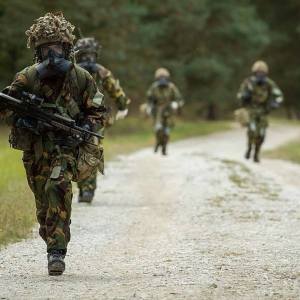 I envy his confidence and abilities; he will excel at his future tasks.

Although we are immensely proud of his achievements, we are still his Grandparents and we will always worry about him. 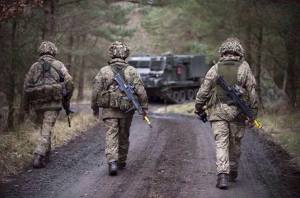