The last few weeks have been challenging and we needed to escape again even if it was for one night.

The school holidays were over and weekday travel was less of a hassle. A fairly late start for us saw Puffin hurtling down the M5 motorway towards Bristol. We turned off at junction 19 for the Gordano services and drove towards the Clifton suspension bridge that crosses the River Avon Gorge. The extreme knitter likes to be surprised and I always try to include a fear factor if I can as it keeps the blood pumping. I excelled myself this time as I’m not good with heights and as we had never driven over the suspension bridge before I felt it had to be done. Crikey it’s high, Bum cheek clenchingly high and to pick up the road to our next destination we had to turn around and go back over it. 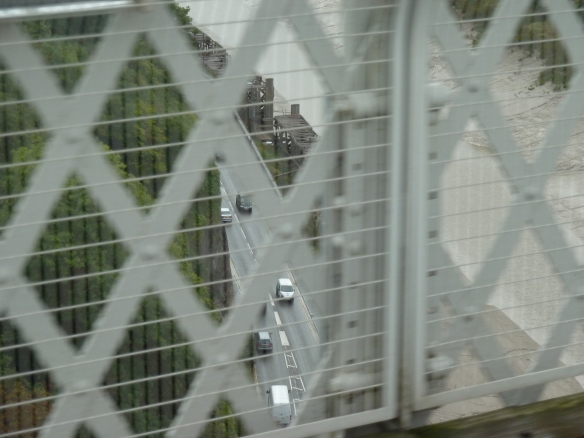 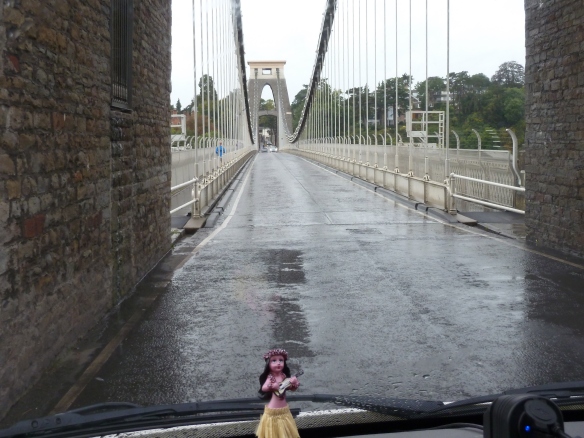 Safely back on a lower ground level we drove towards Cheddar Gorge where we stopped in one of the lay-bys in the gorge for lunch.

Next destination was Wells for a little sightseeing and retail therapy for the extreme knitter. 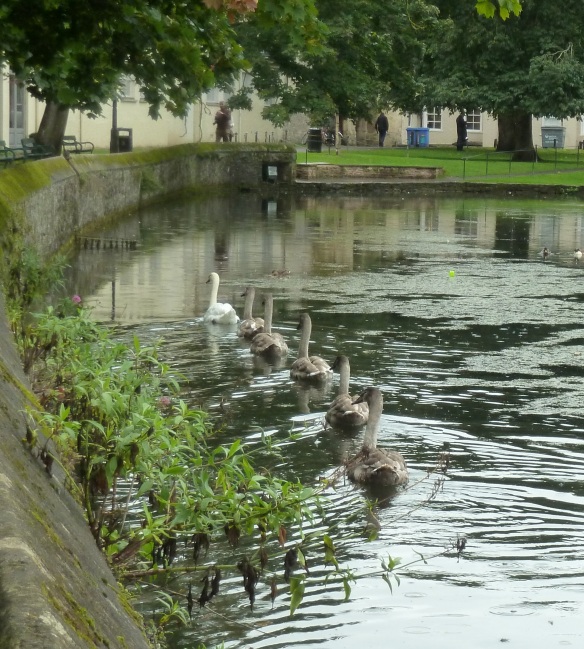 Wells is a small city with an amazing Cathedral and lots of nooks and crannies to explore.

Back on the road again and we joined the east bound A303. The signs for the Stonehenge visitor centre appeared at a roundabout, but I wasn’t going there. A little further along the A303 we turned left into a bye way called the Drove. It is just a dirt track that runs up beside the famous Stonehenge. The drove is used by campers from all walks of life to wild camp with a view of the stones across the field. New age travellers, Hippies, Over Landers and Motor home owners and now us.

The look on the extreme knitters face was priceless when I announced that this was our campsite for the night, but as always she’s a game girl and embraced the madness.

Stonehenge has become a major tourist attraction that can only be visited by paying substantial amount to the English Heritage. They had the roads around closed and blocked off to stop the common people sneaking a crafty look, but the Drove has survived for now. It’s a Bye way running close by with a public right of way. I’ve been wanting to stopover here for sometime and I thought that if we didn’t do it soon the powers that be will eventually close it and our chance would pass.

The Autumn Solstice occurred on Friday 23rd September, so it could have been a mistake visiting so soon after the mass visit by hundreds of Druids on Friday. I expected it to be messy and littered after so many people had visited, but it was a pleasant surprise to find it litter free. There weren’t many campers and it was easy to find a fairly level place to park with a good view of the stones.

The paying visitors arrive by bus from the visitor centre having paid to park, then coughing up £18 a head to wander around the circumference of the stones, never getting close enough to touch them.

The meatballs in tomato sauce made another appearance, but sadly no Bacardi just in case we needed to drive off in the middle of the night.

It was suggested that I should dance naked in the middle of the stones at sunrise, but sadly I cancelled the dance as the sun didn’t rise in the morning. Well I suppose it must have risen, but I couldn’t see it for the rain and mist.

We had a peaceful, quiet and safe night. The extreme knitter was at ease there, which is a good sign because if she’s not comfortable with an overnight stay she will say so.

Bacon sandwiches for a late breakfast. We then wandered down the drove to the point where the visitor buses stop. This entrance was guarded and gated off. After walking on a little further we found a public footpath that appeared to lead to the stones.

Not only did it lead to the stones, we were only about 15 metres further away than the paying punters and only separated by a wooden fence.

We had briefly passed through Marlborough when we had previously visited our Grandson at his Larkhill barracks and said we must visit when we had time to explore. We did try to park there on the way back, but failed.

On the trip back, just north of Tidworth we saw a tank coming down the road towards us with a squaddie under driving instruction. The extreme knitter suddenly waved to them out of the blue. I dread to think what the instructor said to the Squaddie.

One of the things that comes with the passing years is our inability to read the small print in newspapers and I’ve wore reading glasses for a few years now. I hate having to use them. Carrying reading glasses is a hassle and I always forgot to take them with me when we were out. I have to get the extreme knitter to read menus for me or she carries a pair in her handbag.

I ordered a new pair of reading glasses and they arrived the other day, all the way from France.

They are called Nooz and just like the Pince-nez from the 19th century they clip on to your nose without the aid of ear pieces, but using modern materials.

The Nooz are available in several colours, but a little expensive for reading glasses. 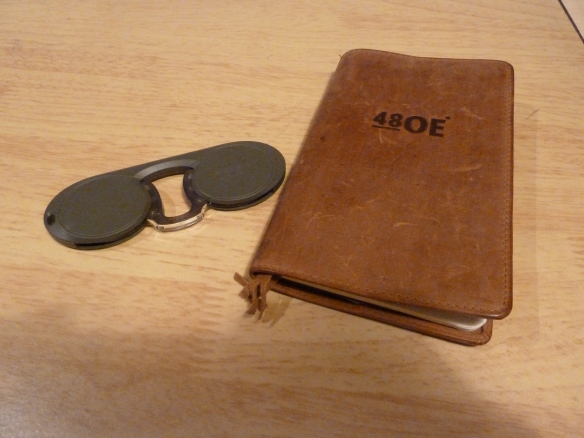 They are made from polymer making them comfortable and flexible. They come with a slim case that fits in the shirt pocket.

On the plus side:-

They don’t pinch your nose

The case is small and unobtrusive.

Well there are no faults really.

After years of removing ordinary glasses by pulling off with the side ear pieces it takes a little while getting used to lifting them off by the bridge. I still sometimes forget and grab at non existent ear pieces.

I can’t decide whether I will look trendy or just a prat.

It’s late September and here we are again driving Puffin to the Adventure and Overland show at the Stratford on Avon racecourse.

On the way we had called into the local clinic for our Flu jabs and returned some clothes to Marks & Spencer’s.

I like to be productive. I did think about dropping a load of rubbish at the local tip as we passed by, but they have height barriers.

I look forward to this show every year. It fuels my dreams, makes me want to travel more and perhaps push some boundaries.

The stands selling natural products made from leather and wood always draw me in.

I can wander the tools and parts stalls all day, trying to stop myself from buying that must have set of spanners.

Obviously the vehicles are the stars here and the mix is so varied.

I will just let the photos tell the tale.

The French made Gazell demount caught my eye. It’s being sold in the UK by SBS

There was a good turn out of Ex army conversions 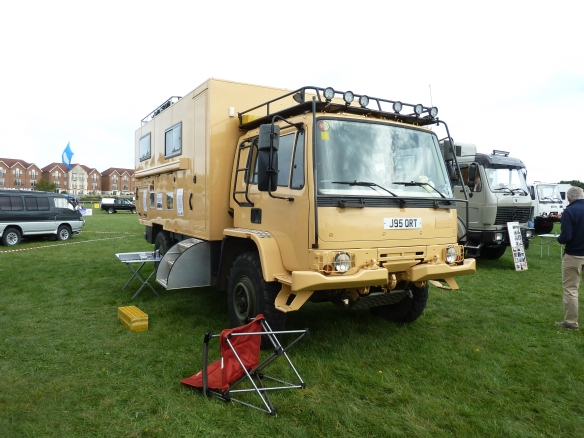 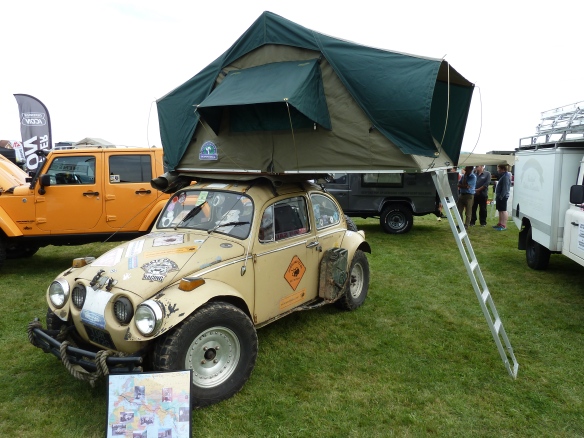 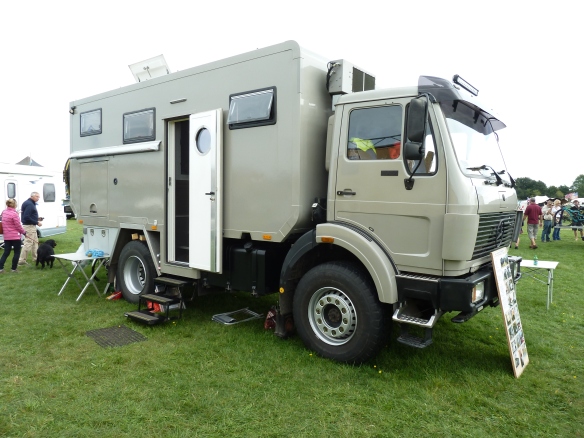 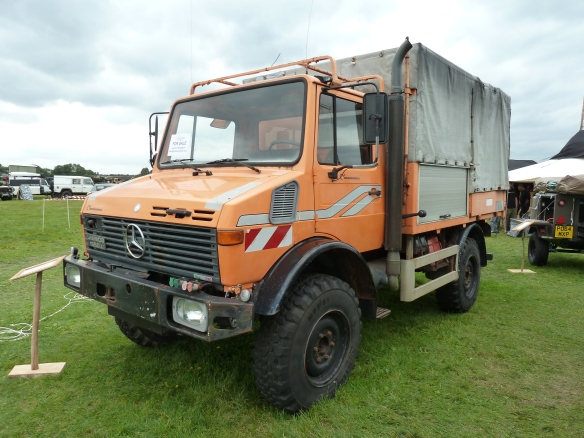 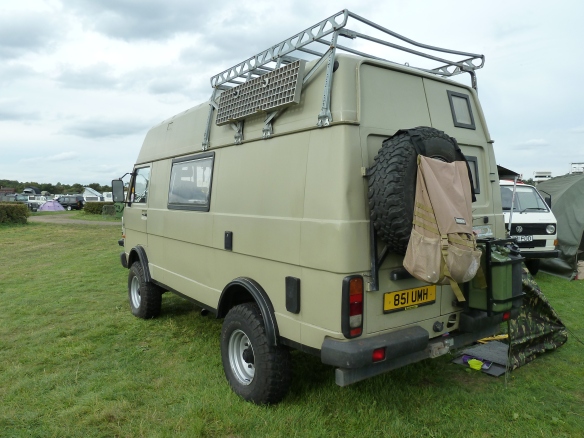 This Unimog is Mowgli as seen on the blog

Cooking was high on my agenda. I was hoping to find the Hawkins pressure cooker. A simple, but effective cooker made in India since 1959. The small 2 litre capacity cooker would be ideal for our campervan allowing us the cook fresh local produce in a greatly reduced time. If there was one there, I didn’t find it.

I was also looking for a silicone mould for our Omnia oven, but it seems that Omnia don’t have any in stock in Sweden, let alone the UK.

This is a cartoon by Armond Foster that appeared today in the latest issue of MMM (The Motorhomers Magazine) that I thought was a very similar situation to us when loading the camper for a trip.

This holiday post is a little late. We actually went away on 13th August. Better late than never.

The camp site had been booked months in advance because of the school holidays. Ruby was sleeping over at The feral daughters house.

The camper was packed to its limits with stuff that probably would not be used or required.

The reason for all this extra stuff was? We were going to Chard in Somerset taking our Granddaughter along for a week long camping trip. It’s been two years since she last went away with us and eleven year old girls need lots of stuff, or so I’m told. We will see.

Heading south on the M5 on Saturday morning is never going to be a pleasant affair and the usual travel time of 2 hrs 15 minutes turned into 4 hrs 30 minutes.

We had opted for a well tried and tested campsite. Alpine Grove is an excellent camp site set amongst the trees that we have visited many times before with our grandchildren and it has never failed to keep them active and happy

The first day always means a lot of fettling and resetting as I tweak the awning to get it just right. I’ve noticed that I’m not the only man on campsites that does this. The male species are builders of camps and if we were given the go ahead by our wives the next step would be hunting for our dinner. Luckily for the local wildlife we brought our own food.

Yes, the first night specialility made an appearance. Meatballs in a home made tomato sauce.

Being the gentleman that I am, I let the girls have the comfort of the camper and I rediscovered my wild man roots and kipped in the awning. My back could regret that decision later.

I lay in the awning on the first night listening to a concert in the park blasting out from nearby Chard. The main group for the night were the Wurzels who played into the night. They had three encores and in each one they played “I’ve got a combine harvester” and “I am a cider drinker. Luckily, probably because of their age the concert ended at 11pm. I expect their beds were calling and before anyone calls me ageist, I’m about the same age and my bed had already called me.

The week was spent relaxing whilst our granddaughter spent most of her time either in the swimming pool or making friends in the play area. 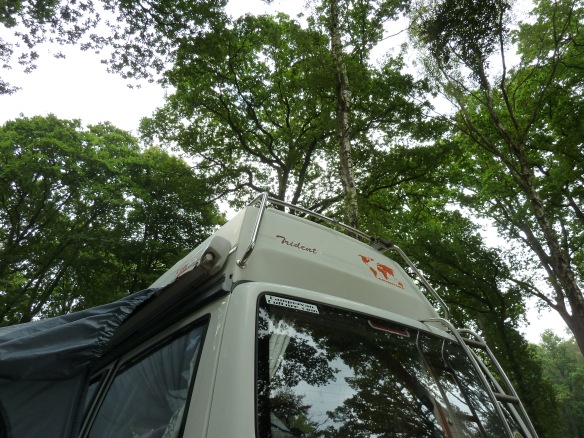 We did some day trips out, but it soon became apparent that the parking facilities along the Devon and Dorset coast had changed since our last visit. Virtually all the car parks in the various towns banned any motor home/ campervan parking day or night. Our first visit to Lyme Regis was aborted as we couldn’t find any parking. I later searched the internet and eventually found a temporality park and ride for Lyme Regis on the Charmouth Road, which proved to be an excellent service for a later revisit.

Six nights sleeping on an air bed in the awning was taking its toll on my aging bones and the weather forecast was for heavy rain on the Friday. We decided to leave the camp site one day early to avoid the rain and the Saturday morning traffic.

The rain arrived earlier than forecast and we had to break camp in the rain with a soaking awning.

After a fairly uneventful drive we arrived home and emptied all the stuff that we took with us and didn’t use.